I often get asked “what’s it like going from one babe to two?”

“F**ked, actually”, is what I’d like to reply, but usually I’m more like “yea look, it’s a bit of a different ball game”, with a casual nervous laugh at the end.

The truth is, for me, I felt the change more than going from none to one.

Having Teddy was a game changer, obviously, your whole world changes. But for me it was still relatively the same – I could work around one babe when it came to social occasions at the same time as naps, I could still duck down to the supermarket and run in to grab a hot chicken, I still had that one hand to do all those things I needed to do.

Running down to the supermarket now takes a full hour of planning and negotiation, and usually results in a Kinder Surprise I promised myself I wouldn’t buy.

It also requires some form of equipment, whether that’s the pram, the carrier or a food trolley. It’s not as straight forward as running in, grabbing what you need and going. You have no hands. NO HANDS PEOPLE. You cannot carry those groceries, and if you think that your three-year-old can be trusted for 30 seconds if you let his hand go you are kidding yourself. That kid is going to touch everything, stick his fingers into all the things, walk into people and then head straight for the treats, because they’re shiny and colourful and at f**king eye level for your small friends. 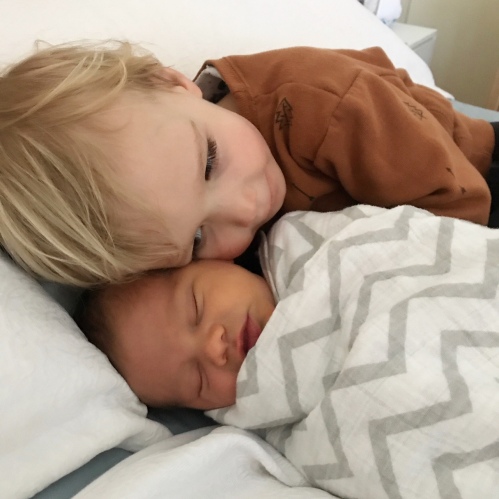 I suppose in a way it gets easier as the older one becomes a bit more independent. Except, he doesn’t. He’s still three. He still needs you to take him to the loo, even if you’re in the middle of feeding a baby, and trust me on this one, you don’t want to gamble with how long they can hold for.

Getting out of the house would have to legitimately be the hardest part of our everyday lives. I’m 100 per cent sure every time I arrive anywhere I look like I’m about to have a breakdown.

You get one ready and then start on the other. You then realise the first has done a poo and needs to be changed. So you change him, and while that’s happening the other one has take his shoes off, his hat off and is in the process of ripping all his clothes out of the drawer because he wants to wear the jumper with the dinosaur on it.

Meanwhile, I’m still in my pyjamas.

Funnily enough I’ve always thought I’d have three kids, boys actually, so when Teddy was born and he was a boy, I thought ‘woah, here we go’, and then came Beau – and now everyone who knows me is like “so, you going to have another one?”, and honestly – I don’t know. A lot of things would need to happen but it’s not off the table, and I’m happy with that.

But we’re eight months in and while it’s still hard, everyday is different. And there’s one thing for sure – it’s worth it.

I recently read a quote saying “the days are long but the years are short”, I couldn’t agree with it more. I try to remember this when I think the neighbours are calling child services due to my yelling.

So in a bid to help some other mummas out there on this mummahood journey I’ve included below a few (hopefully) handy tips:

*One thing I worried about endlessly before Beau was born was, would I love this baby the same. And the answer is yes, 100 times yes. I can’t explain how it happens but it does, and then, just like with your first, you can’t imagine life without them.

*The second time round you are SO much more relaxed. First time mummas are just that, first timers. By the time your second is born you’re a pro. You know what to pack, you know the routine, you know the tired signs, and you know what warrants a trip to the doctor and what doesn’t.

*On the back of that, second babies definitely don’t get that same time with you as your first did, they have to share you a lot more. But, take comfort knowing that they are getting the absolute best mumma, you’ve been there done that and got a vomit stained t-shirt to prove it. They have a mumma who knows the ropes, who’s relaxed and just has a lot of love to give.

*Ask for help if you need it/take it if it’s offered. This is a big one. For us, our friends are our family since we live abroad and they have at times been our lifeline. From cooking for us to looking after Teddy when Beau was born they have been amazing. I hate asking for help but I’ve definitely learnt to accept it if it’s offered, people won’t offer if they genuinely don’t want to and you will be super thankful for an extra set of hands – or just a glass of wine with your hubby.

*Get ready first! This one sounds strange but trust me, it works. When you’re going anywhere for the day, get yourself ready first. Once you’re done get the kids ready, that way the minute they are ready you’re on your way.

*Sounds obvious but pack your bag the night before. Make sure you’ve got everything in the bag ready to go, nappies, wipes, outfit changes, bibs and any food that can be pre-prepared (or is in a packet haha). That way, in the morning all you have to concentrate on is breakfast, getting dressed and putting your babes in the car.

So, it’s safe to say I basically disappeared off the face of the earth. Legit, that’s almost what it feels like has happened.

But fear not – I have a solid reason for going missing – well two actually.

I took a wee break to co-produce a couple of small legends and that shit is time consuming.

Then what happened is I felt like, oh man, now I’ve had babies and no-one wants to read about that…ha! Turns out I was WRONG. Yip, you’ve ben asking so here it is ladies and gentlemen – another mummy blog.

BUT – before you stop reading and say “f**k this shit, Mrs Knees has gone to the dark side and is trying to make some sweet moolah off her freaking gorgeous children”, I assure you this is merely an outlet to reduce what I would imagine to be enormous therapy bills. Also, I have another job to pay all my bills– hurrah!

However, I realised I would like to feature these two small friends and the strange and psychopathic things they get up to every now and then.

Jokes aside though, I’ve had two beautiful boys (Teddy, 3, and Beau, eight months) and they are a laugh a minute, so I thought ‘hey, let’s share this hilarity with the world’. This will be motherhood in all its honesty – the good, the bad and the even worse. But mostly, just a laugh and an outlet to let all you other mumma’s and dadda’s that you’re not alone – when your three year old tells you ‘f**k off’ followed by the fact he ‘loves you the most’, it’s totes normal.

And for those of you who don’t have babes, or just don’t want to read about them, I will from time to time post about real people stuff, just to keep you on your toes.